The Pantheon 1.0 dataset maps “historical cultural production” by collecting, visualizing and analyzing data from the biographies of historically, culturally and/or politically significant figures worldwide. See here for more info about their methods. Although this map is largely created by listing the first name in every country (see Ranking > People > Parameter: Birth Country), the dataset currently only takes into account the birthplace of these figures – without regard for where they achieved their fame in life or whether the country to which they’re affiliated even existed in some form or another at the time. As such, there is some personal interpretation involved. For instance, Charlemagne would be first on the list for Belgium, but I opted to leave him out because a. there is a certain amount of uncertainty regarding his place of birth, and b. he is not associated with what we currently see as Belgium or its direct predecessors, such as the Austrian or Spanish Netherlands.

Another example would be Immanuel Kant, who is listed no. 1 for Russia because he was born in current-day Kaliningrad. However, for all intents and purposes Kant is most often seen as German, not Russian, so he is bumped off the ranking in favour of no. 2, Vladimir Lenin. As a final example: both Lewis Milestone and Emil Constantinescu were born in Moldova, but moved abroad at a young age and were therefore excluded. Vincent van Gogh, however, only moved to France later in life and is to this day closely associated with the Netherlands, so he remains no. 1 for the Dutch.

Obviously, nationality and identity have always been controversial subjects, and there is no way to ever create a map like this in a way that comes anywhere near objectivity. The intention of this map is not to provoke or to antagonize, merely to entertain. 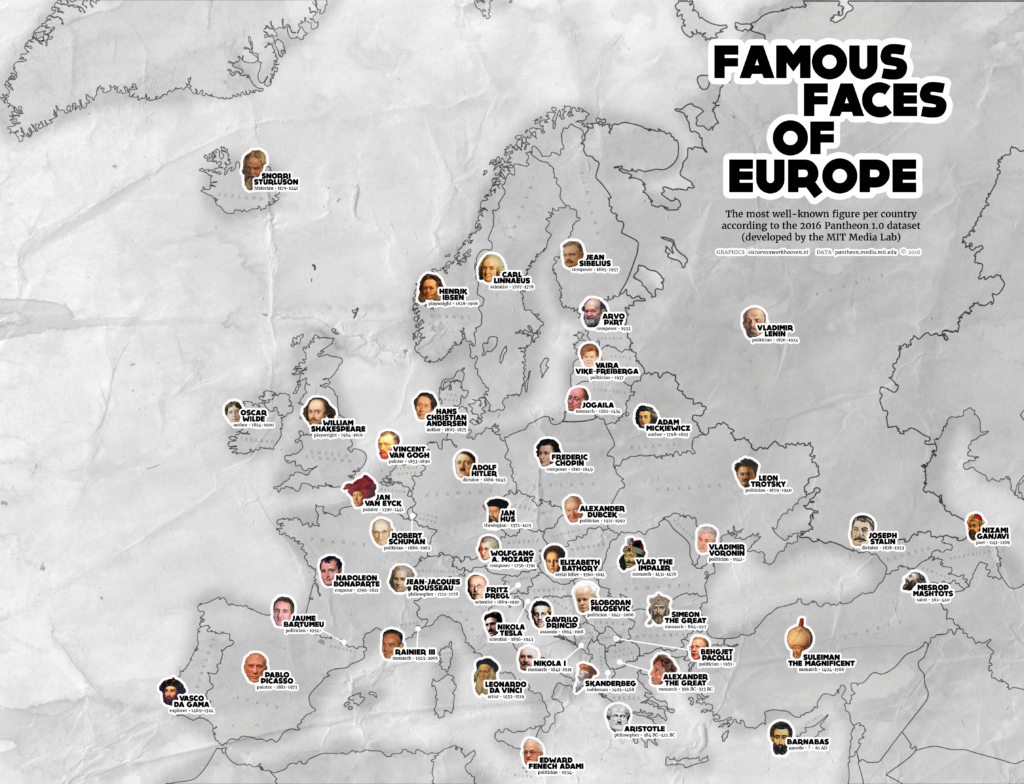